The explosive charged collar ('model' Guadalcanal-22) is used throughout the Battle Royale series and is mostly use to kill defectors, saboteurs and others who have tried to escape while in the game. The collar kills them by exploding the throat of the user.

The collar is made with Stainless Titanium which can resist impact, oxidation and water. Also, the collar is protected with plastic sealant which protects the microphone, GPS locator, alarm system and the explosive detonator from water and shock. The detection system uses a satellite control system, so the collar can be controlled from the operation base. The microphone is a military spy model which can record everything for up to 60 hours. With the time-alarm beeping system, it can indicate to the carrier if they are almost out of the map, in a danger zone, or to count down the explosive detonation.

The type of explosive used in the collar is a malleable military explosive (mostly C4 plastic explosive).

The quantity is fairly small, 10g of C4 in place behind of the mercury detonator, enough to explode the throat and yet not kill other people who are around.

How to disable the collar[]

There are two ways to disable the collar, the first is seen in the first Battle Royale by Yutaka Seto, Keita Iijima and Shinji Mimura during the hacking process to attack the control base with the truck full of inflammable materials (2 hydrogen tanks and 100 Molotov cocktails all wired to an explosive ordnance in the front of the truck). Since Kiriyama killed all three of them, the collars were deactivated for 15 minutes, enough time to Kawada to disable the collar signal system. The second Method is seen in Battle Royale 2 Requiem when Nanahara says to Maki Souda to use the EMB to destroy the Electronic system of the collar, which at the base operation all students status are K.I.A. 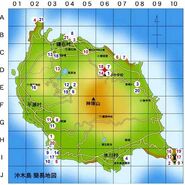 Death location emitted by the collar after 3 days

Community content is available under CC-BY-SA unless otherwise noted.
Advertisement