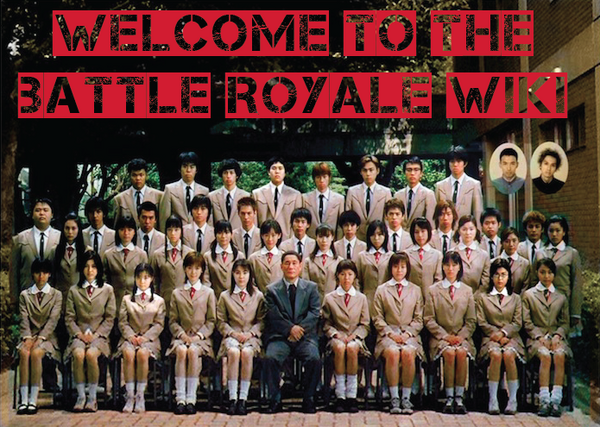 Battle Royale is a Japanese horror thriller film that was released on December 16, 2000. It was based on the novel which was released on April 22, 1999 in Japan. The film was directed by Kinji Fukasaku, and features Takeshi Kitano and Chiaki Kuriyama. Both the film and novel featured a controversial story:
A class of ninth-grade students from a Japanese high school are forced by a new legislation to compete in a Battle Royale. The students are each given a bag with a randomly selected weapon and a few rations of food and water and sent off to kill each other in a no-holds-barred (with a few minor rules) game to the death, which means that the students have three days to kill each other until one survives--or they all die. Read More...

Battle Royale is a novel written by Japanese author Koushun Takami, with ISBN 156931778X. It was first published in Japan in April 1999, and it is one of Japan's best-selling and most controversial novels. It later formed the basis for a cult film (which spawned a sequel), and has been adapted as a 15-volume manga series, later adapted into English by Keith Giffen and published by TOKYOPOP, which itself now has a sequel.

An English translation of the novel was published in the United States by Viz in February 2003, and has been available in the United Kingdom since July 2006 from Orbit Books.

Battle Royale has been adapted into a serialized manga, written by Koushun Takami and Masayuki Taguchi, was published in Japan by Akita Publishing. The manga consists of 15 volumes and is distributed in English by Tokyopop. There is a manga sequel called Battle Royale II: Blitz Royale. At October 2007, a new special edition of the manga will be released. The manga follows the plot of the novel fairly closely, but also expands on the backstory of each of the students. It is also far more sexually graphic than the novel and film versions, and is also noted for its intense, gory violence.

Retrieved from "https://battleroyale.fandom.com/wiki/Main_Page?oldid=9749"
Community content is available under CC-BY-SA unless otherwise noted.